Skip to content
Ah, Star Wars. I was in high school when the first movie (strangely titled “Episode IV”) came out. Back then if you wanted to see a movie, you went to see it! There was none of this newfangled streaming over your phone…heck, we didn’t even have smartphones! And we liked it!

Anyway, that was then, this is now. Now we have little tiny X-Wings and TIE Fighters and a Millennium Falcon that we can push around on a tabletop and make “pew-pew-pew” sounds until somebody blows up.

And somebody always blows up.

Fantasy Flight Games — after securing a licensing agreement with Lucas/Disney — announced the game system in 2011. Gen Con 2012 showcased the release of the first core set which included one X-Wing (Luke!) and two Imperial TIE Fighters. The core set comes with dice, movement templates, maneuver dials, asteroids, pilot cards, upgrade cards, and a variety of tokens. I had never heard of the game until my son came home one day talking about playing Star Wars with a friend of his. He played it a number of times and then started asking if he could go up to a particular game store where they played on Wednesday nights. Hmmm, okay, I guess?

I stopped in to watch at one point. The game seemed really fiddly to me. So many moving parts, I just wasn’t interested. Little did I know.

A few years later (and many dollars of discretionary income as well) and I need a dolly to transport my X-Wing stuff to the game store (yes, the same one where my son learned to play). I have enough Imperial ships to run two simultaneous campaigns of “Heroes of the Aturi Cluster” (more on that later) so yeah, it’s a big box. I read a comment online that suggested if you spend over $250 on the game, you had a mild problem, but if you had spent more than $250 on storage for your game, then you really had a problem.

I really have a problem. 😳 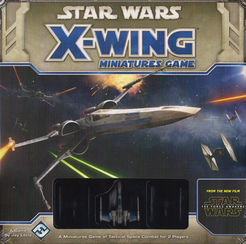 A few years later and Fantasy Flight released a second core set to coincide with the release of “The Force Awakens.” It included Poe as a pilot (later upgraded in the X-Wing upgrade pack) and BB-8 as a droid.

Recently Fantasy Flight announced that version 1.0 of the game (we didn’t know it was called that, we just thought we were playing X-Wing) was going to be retired, and version 2.0 would get released in September, 2018. There have been plenty of articles written since then, but this post is supposed to be a review of the game, not a history article, so let me get to the review part.

This site uses Akismet to reduce spam. Learn how your comment data is processed.

This website contains affiliate links. I include these links to help you find either specific (or my favorite) games or game-related items. If you purchase an item from the link on Sundered Realm, I will receive a small commission.

Sundered Realm is a participant in the Amazon Services LLC Associates Program, an affiliate advertising program designed to provide a means for sites to earn advertising fees by advertising and linking to amazon.com. Game images are frequently (but not always) linked to the matching product on Amazon. Purchasing a game or item through one of those links will not increase your cost but will help support my blog via commissions.